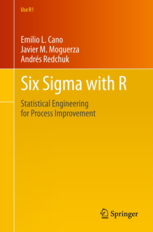 I have just released a new version (0.9-3) of the SixSigma R package, with functions and data used in the books Six Sigma with R and Quality Control with R. The main changes in this new version are related to function ss.rr, for measurement systems analysis (Chapter 5 of Six Sigma with R). After the feedback received by the user Garry Kitchin (thank you very much Garry), I have included the alphaLim argument which allows to set a threshold to do the Gage R&R analysis without the appraisal/part interaction effect (default to 0.05). This is common practice when doing MSA and it was certainly needed an automatic handling of this, similarly to other well-known software packages. In addition, the default value for the sigma argument is now 6 instead of 5.15, in line with the Six Sigma approach.


Another important change is concerned with the F test in the ANOVA table of the full model, i.e., with interaction. The standard ANOVA table returned by R is for fixed effects, but an R&R study implies repeated measures, and therefore the error term (denominator of the F Statistic) should be the interaction one. Thus, the output of the ANOVA table has also changed to return the appropriate tests for the main effects (appraisal, part). What surprised me while checking the references, mainly the AIAG MSA Manual, which is one of the main sources for Six Sigma practitioners, is that in the example provided in page 127 repeatibility MS is used as error term, whilst in the appendix it is used the interaction MS (which is actually common practice in the rest of the references and commercial software).

By the way, I reviewed all the function code, included clearer comments, indentation, spaces, etc. Also a bug in the control limits of the range control chart has been corrected, along with some minor improvements.

I feel really encouraged to continue developing the package when receiving great feedback from people "working in industry where the grip of heavily commercialised software dominates, and feeling like lone warriors battling against this" ;-)